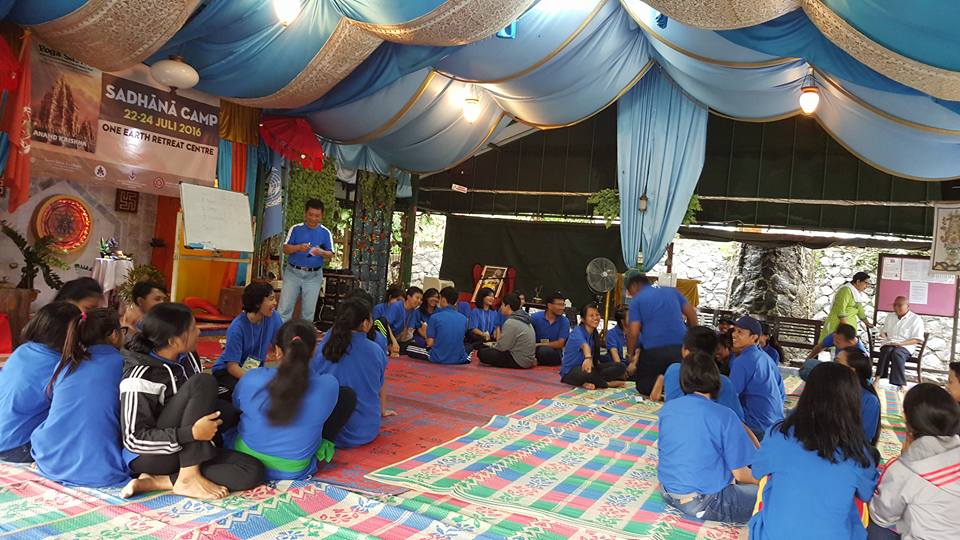 PT. Taspen, STAHDN, Anand Ashram Foundation, and Centre for Vedic and Dharmic Studies held the fourth Youth Sādhanā Camp (YSC) in One Earth Retreat Centre, Ciawi, Bogor, from July 22nd–24th, 2016. Forty-two students from 4 different Universities in Jakarta and its surrounding cities: STAHDN, Binus, Gunadharma University, and UNJ, spent two days, away from the hustle and bustle of their busy school schedule, to meet and learn about Hindu Dharma in Ashram environment—where they’re not only taught meditation and Yoga practices, but also self-discipline, and enjoyed delicious vegetarian meals.
This time, YSC put on centre stage the latest book transcreated by Swami Anand Krishna, “Dvīpāntara Yoga Śāstra”—the second book of Dvīpāntara Śāstra Series where Swami Anand Krishna brings to life wisdom from 7 ancient Indonesian’s manuscripts for modern people. As the name suggests, “Dvīpāntara Yoga Śāstra” deals with the science of Yoga, one of many Hindu Dharma’s gifts to the world. The students were not only learn the basic principles of Yoga, but they also had the opportunity to learn how to put them into practice from Ida Ayu Utami Pidada, former member of Indonesia Parliament, and Ngakan Putu Putra, editor in chief of Media Hindu. Swami Anand Krishna himself presented “Hindu Dharma and Yoga” which took everyone back in time, thousands of years to the beginning of Hindu Dharma, to appreciate its deep spiritual-heritage that lasts for millenniums and sits at the very heart of the largest human civilisation on earth: the Sindhu Civilisation, that Indonesia is part of. Swami Anand Krishna also asks the students to learn from Parikshit, a character from Mahābhārata. Parikshit name comes form Sanskrit word “pariksha”, to examine; Swami Anand Krishna reminds us all to use our intellect to examine whether our belief and common practice progress ourlives in line with universal-spiritual values of Dharma.
Reported by: Made Harimbawa (Centre for Sindhu Civilisation Studies). For more information please visit our Facebook Page: @sindhu.civilisation.studies and www.anandashram.asia.
Previous PostPress Release Samskriti Sindhu Museum of World Culture Next PostAn Evening Meditation for Inner Peace